A Biker in Hibernation

I have a biker in me. A lot of people who have known me only in recent times may find that information quite shocking, but that is the truth. I have made quite a lot of bike trips in the past and some of them on the spur of the moment, without planning. It is just that the biker is in hibernation right now. I am waiting to get back in shape so that I can survive the rigors of the road. The roads in Pune are a big help, but still needs lot more.

Anyways, while I was thinking of the biker-of-yore (yours truly), I was just reminiscing some of the past memories. They are mostly vague and I just thought of capturing them in short here, hopefully in the order of chronology.


My First Ever Bike Trip:
When I say my first ever, I mean my first ever long trip. Trips to work or to college do not count. Neither does the 60 KM ride to Nandhi Hills from Bangalore in the middle of the night. It has to have a minimum of 100 Kms to qualify or Sandy (founder of Bikers Fraternity) will not accept it as a bike trip.

This particular one was one sponsored by my previous company (Mentorware). A company that sponsors bike trips, yes sir. No, I don't think they still do it. This was pre-recession era, you see. This company had this annual outing plans for the entire employee base. This was usually carried out in Tempo Travelers (now Force Travelers and TT for short), but this time some of us got the permission to use bikes and get paid for the fuel (how awesome is that). So the trip had two Tempo-Travelers (Now called just Travelers, after the company got renamed to Force Motors), and five bikes. Including the two pillions, there were 7 bikers in total.


The trip went on well and without much incidents till around the time we reached Mysore. The to TTs and the bikes were more or less in tandem throughout this time. One of the bikes had a slight problem in that it used to skid often, and another one was slightly less powerful, so these two stuck together, the other three (including mine were ahead). After Mysore, the three of us split from the rest of the group and proceeded ahead. The pillions had shifted base to the TT by this time (traveling pillion for long distances can really cause pain in the backside, unintended pun). For some unknown reason, my bike decided to rest. I think it did not like being stressed too much. I thought the engine was shut because of overheating, but this was the only time it has happened, so I am no longer sure. The continuous ride was under one hour and I have ridden at higher speeds and for longer duration after that with no problems at all. The other two bikers had overtaken me. Just when I was about to panic, one of them luckily noticed that I was not around and came back. I was young, did not know a lot about bikes. I did not know where I was and did not know the local language, it would not have been fun to seek help with the only sentence known being "nange Kannada gothilla" (I don't know Kannada). The best part was that the cell-phone was of no use either, with no towers in sight. Luckily the other guy had a working phone, but knew as much about bikes as I did. So while we waited we called the guys who were left behind, because the guy in front could not be reached. They had taken a detour and were expected to land ahead of the place where we were stuck. At this point, I made a mental note to carry a tent, sufficient amount of water and some snack for future trips (other than the tent, I have followed the rest in all future trips). After about 10 minutes worth of rest, the bike felt refreshed and started on one stray attempt. Quite relieved that we won't have to sleep under the starry sky with no food or water before we get help, we moved on.

At this point, we did not know that the Rain God had decided to help me cool the engine down, and the delay was in getting the water down from the high atmosphere. I am sure Indian Bureaucracy was involved. It touched down as soon as we started moving from there. I forgot to thank him, but how could I have known. Some people may halt and wait for the rain to subside, but not us. Young and foolish as they say. No qualms though, nothing happened. We rode on till we  found the guy, manager in the company, who had gone ahead. He had realized after going quite a long way that he was alone and had decided to take a halt. So we took a short break to appraise the situation to the manager. The HR (the guy who waited for me), the manager (who did not notice) and the software developer (your's truly) marched ahead.

The road wasn't all that good for the initial few KMs. The rough roads slowed us down a bit, but it was worth it riding through the woods. The Bandipur forest was fun, and then we entered Mudumalai. This seemed denser to me. The rain and the forest made the ride a cold one. To ride in wet clothes, you should experience the feeling to know how fun that is. The road continued to be bad (the condition had improved substantially in my subsequent trips, quite before the time of writing this blog). There was ghat in there, which was quite steep. This was the best part of the ride, the first such ghat for me and HR guy. We were thrilled at it. There was another route with a steep much lower than this, but this was both shorter and fun. We got to Ooty by 3 PM because we took this route. This is when we realized that we do not know which way to go. We knew we had to go to Parson's Valley Resort and assumed boards advertising it to be available everywhere. To our disappointment, no one had even heard of such a thing. The only Parson's Valley they knew of was the Parson's Valley forest reserve.

All the coordinators for this trip were in the TTs and three of us bikes had reached the spot. Two of us had not activated mobile roaming and hence could not make any calls. One biker who had roaming activated had his battery drained. With whatever charge was left, he tried calling the organizers, but no one could be reached. So we decided to find the route ourselves to Parson's Valley Resort. The best bet was that this would be around the Parson's Valley Forest Reserve. With this in mind, we went in the direction of the forest. Someone told there is a dam around there too. So we made that our aim, thinking that there should be a resort around the dam. We kept going with no signs of any resort around. Finally we got to the dam. It was around 5 PM by now. There still was no resort, but a path went down from the road. It was just a mud-path and we did not think a resort could exist there. Also, the rains had made the steep drop almost impossible to go by bike. We decided that could not be the resort, and went into to the dam to check if we could get any information. The people there did not even know what a resort was. So they suggested we go another 8 KM to another dam and check there. It was a fruitless travel. By this time, it had started to get dark and we were in the middle of a jungle. With no idea about what to do, we decided to get back to town and started on our way back.

Below is a patch of the road leading to Parson's Valley. 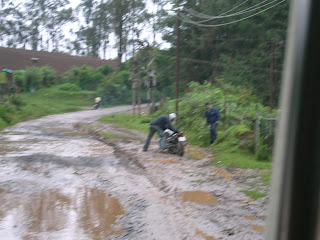 Rest of the story will follow in the next installment.