I went through the Manifesto of the AAP, the only one I have gone through yet. I have some queries related to it, hoping that someone from the party will be able answer these. Quite late probably, but I still have 10 days before my city goes to vote. The numbering of points is not necessarily as per the numbers in the manifesto. These are numbered as per questions that arose in my mind.

I also have certain queries which are not related to things mentioned in the manifesto, but about some issues on which the party or its members have taken stand against. These are there at the end.

This has been a major point that the AAP has been aiming at. The full plan of the Jan Lokpal is not known to me yet. Is this available somewhere on the internet for analysis and scrutiny? It somehow feels like it relies on the incorruptibility of individuals. How would a nation of corrupt people produce a person for one incorruptible position? The Lokpal seems to have control over all organizations, but who has the power to initiate investigation against Lokpal? How do we hold the Lokpal accountable?

While it is always good to have investigation being timed, but can we really and practically do this? Wouldn't there be a higher risk of insufficient and hurried investigation in this case? How do you strike a balance between quick investigation and thorough investigation? What happens if sufficient information is not gathered in the timeframe provided?

What would be the difference between these and the regular nyayalays? would these have additional judicial powers? Would these be independent of regular judiciary? Would they be something like a Khap Panchayat? How do we ensure such Nyayalays do not breach the constitution and the law? Would there be lawyers in these nyayalays?

a)            Selection of commissioners: How would that constitutional committee be formed?
b)            Advertisement and TV space: I agree regarding public money aspect, but should the rest really be curbed? Should it not be a free country? Also, how would you track paid news, as opposed to news based on personal bias? Of course news should be impersonal but since it no longer is, how exactly would paid news and personally biased news appear different?
c)            Proportional Representation: Is this ideal, considering that parties from UP, Bihar and some such heavily populated states will have more representation than some states such as Kerala which has very less population.
d)            Right to Recall and Right to Reject: Please elaborate on what you mean by right to reject and explain how you plan to avoid misuse of Right To Recall as a blackmail tool.

a)            How do you intend to ensure quality medical care irrespective of monitory status? Do you give free treatment in private hospitals or implement something like an insurance scheme? Or is it going to be something like the NHS system of UK. You should probably explore this option.
b)            Homeopathy etc.: According to majority of scientific community these are unreliable methods and unscientific methods which dupe people of real treatment. Before investing further on these, do we intend to get these methods scientifically validated by performing proper investigation and studies before investing public money into any more facilities in these streams?

a)            I am completely against democratising education. The world has enough people who do not care about truth or science and would rather teach blabberdash to students. Please leave education to educators rather than gram and muhalla sabhas. Ex: If the muhalla sabha decides that pupils should not be taught that the sun is a star around which earth rotates, would that be approved?

a)            Would it not be better for the farmers to be allowed to choose the price themselves rather than the government fixing it?
b)            What is the problem with genetically modified food? The larger scientific community says that it is not harmful, so what basis do you form to claim that it is harmful? What is the basis for this? We all know that over time we have produced genetically altered produce in natural ways by cross pollination and many such methods that I do not recollect now. Why does it sound a bit jingoistic?

a)            Women's reservation: Is there a target set for the removal of this reservation? What would indicate that reservation is no longer required? At present there are at least some prominent women politicians who do not need any reservation, doesn't this mean that what is needed is not reservation but rather having stronger women candidates? Would you prefer to have a weaker member in parliament in the name of reservation or grooming a female as a strong candidate?
b)            You do not mention anything about the third gender, transsexuals etc. What is your policy going to be for these who are the most discriminated for their gender.

a)            Waqf properties: Would something similar also be introduced for the Hindu temples of the pre-independence era?

a)            Gram Sabhas deciding on forest land: What if they decide to raze the forest and create farms there? What rules govern these?

a)            Regulations of industries using animals for food etc.: Is this another way of saying you will make India vegetarian? Please elaborate.

a)            Paid news: How do you differentiate between paid news and personal judgement of the anchor?

a)            Weapons development: How do you encourage research in this field? Do you encourage private players or find ways to motivate DRDO to actually research stuff?
b)            ECHS: How do you ensure ECHS is actually worthy? Their doctors are overworked with hardly any time to spend examining patients. When they refer to private dentists, they refer at random to clinics where trainees do a pathetic job (both from personal family experience).

After witnessing mister AK protest the Kudankulam reactor and the main person behind the protest being a member of the party, I really would like to know what is your agenda about this? As has been widely discussed, India's energy requirements are too high to be fulfilled entirely based on renewable resources in the near future. Also, nuclear reactors pollute lesser than the carbon based fuel generators. Considering these, should you not in fact support nuclear reactors for the time being? A country like Japan has been almost entirely powered by nuclear power for a good majority of the time and there was one incident. US majorly draws power from nuclear reactors, no incident so far. India already has nuclear reactors, no accidents so far. France is primarily powered by nuclear reactors. Considering that world-over there are more than 100 reactors and only 2 incidents, isn't it a bit paranoid to fight against nuclear energy, especially in an energy starved nation like India?

If the AAP wins majority in the parliament, but still fails to pass the Jan Lokpal bill because all other parties and some people from AAP objected to it, what will be the plan of action for the party? Would you dissolve the party again because you are not here for power, or would you continue to work on all other aspects while finding an alternative to the Jan Lokpal?

Majority of India's Aam Aadmi is against sex education, but most academia in India and abroad agree that this is a really important education to be imparted to children. Considering the majority of Aam Aadmi has objection to this, what will Aam Aadmi Party do about this?

A lot of ideas in the manifesto require grass root level awareness campaigns. For example, getting reservation to the deserving. How would you go about this?

How do you empower a gram sabha with members who lack awareness or a sense of responsibility?
Posted by Unknown at 7:37 AM No comments:

This is a summary of my review of The Winner Stands Alone that I have written for India Study Channel.

True to his reputation, Paulo Coelho has a philosophical message in this book. The message, though, is a bit vague to me. The main gist of the story is that a lot of people that appear to be successful based on appearances in tabloids and parties are not as successful as you think, and the real powerful people are not usually found in such tabloids. Besides this cynic approach, there is a message in the book which seems to be that you should define the parameters of success for you based on your own choices. The book also touches on aspects of how incidents from childhood impact a person's behavior as an adult. 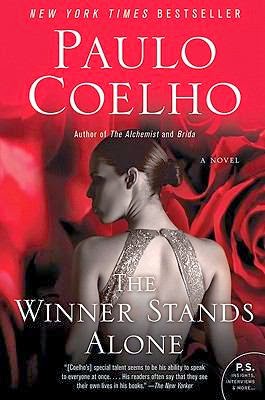 The narration of the book is praiseworthy. You do not want to stop the book midway. While the book is a crime-thriller, this is not one where you are trying to identify the killer. You know the killer, and he is in fact the lead character of the story. The story is of a disparate group of people who are in Cannes around the time of the film festival there and how their stories end up intermingling and how it changes everything for them. The Winner Stands Alone

is a story of a Russian Telecom Tycoon who is at Cannes to get his estranged wife back, and goes on a killing spree for this. Why does he kill these people, you can read the book to find out.

One thing I did not like in the story is how almost every character superficial. Has something going on inside, and show something else to the outside world. It does feel at some time that maybe it is true. I will refrain from calling Paulo as someone who does not do his research. Do read the book and be your own judge. Please check the below options to buy the book. If you buy from these, I get a small commission.